I hope everyone had a great 4th of July.

- Posted using BlogPress from my iPhone

Posted by Unknown at 7:39 PM No comments:

What a great night last night for some quick DX on 20M.  Today is Canada Day, and with that comes the Radio Amateur's of Canada and their contest.  Along with a special event station for World Cup 2014 out of Brazil, I worked 20 or so Canadian operators in the matter of about 60 minutes.  What a lot of fun.  I think I'll be sending my logs in.

Info on the contest can be found at : Canada Day Contest

This month I participated in the Midstate Amateur Radio Club (www.midstatehams.org) Field Day event at the Johnson County Emergency Operations Center.  KB9BVN and I were selected to help with food, and took care of grilling some hot dogs throughout the night for the hungry hordes of amateur operators we had funnel in and out of the station throughout the event.  I also have been coordinating a MARC sponsored Tech to General Upgrade Class.  Due to a low number of signups, we have postponed this class from June to September.  The class will be held on Wednesdays in September and October at the White River Township Fire Department, #51 on Olive Branch Road in Greenwood Indiana.  Signups will be available on the MARC website, or on my blog at http://n9awm.blogspot.com.

This year's field day activities varied quite a bit from the original plan.  I had planned on playing radio with a couple of other HAMS at a local park, utilizing my trailer, and a couple of our ten-tec radios.  Due to some issues with the park space, we were forced to scrap those plans.  Without any place to put the camper, we joined up with the local ARC group's Field day at the Johnson County Emergency Operations Center.

Field Day had to take a delayed start for me, as I had some baseball league trophies to hand out, and a couple of pies to take in the face.  See below.

The kids had a great season, and for the first time in a few years, we actually had some great weather on closing day!  The kids had a great time getting to pie me in the face, jump in bounce houses, as well as having their faces painted and caricatures drawn.

But once that was over, it was time to head down to the EOC.  My dad (KB9BVN) and I were elected the chef's for the event, so a quick run to the store was in order.  We picked up enough hot dogs and chips to feed a small army of field day amateur radio operators.

With gas grill in hand, and all the provisions, we made way to the WA9RDF station setup at the Johnson County Emergency Operations Center located at the Sheriff's department.    The group had 4 stations up and running on the air, setting us up as a "4F Indiana" exchange.  On the air we had had a TenTec Scout, an Icom 710 and 718, and a Yaesu 857.  Throughout the night and next day we had close to 30 amateur radio operators as well as other visitors to our station.  All together I believe we landed close to 250 or so QSOs, and I think I logged about 25 of them myself.  It was a great time this year, and the first time that I had ever done field day with the club.

Here one of my kiddos got a chance to warm up the microphone.  Not only did she bring in a couple of Field Day QSOs, she had a great time, and now wants to get her Ham license just like her mom and dad! 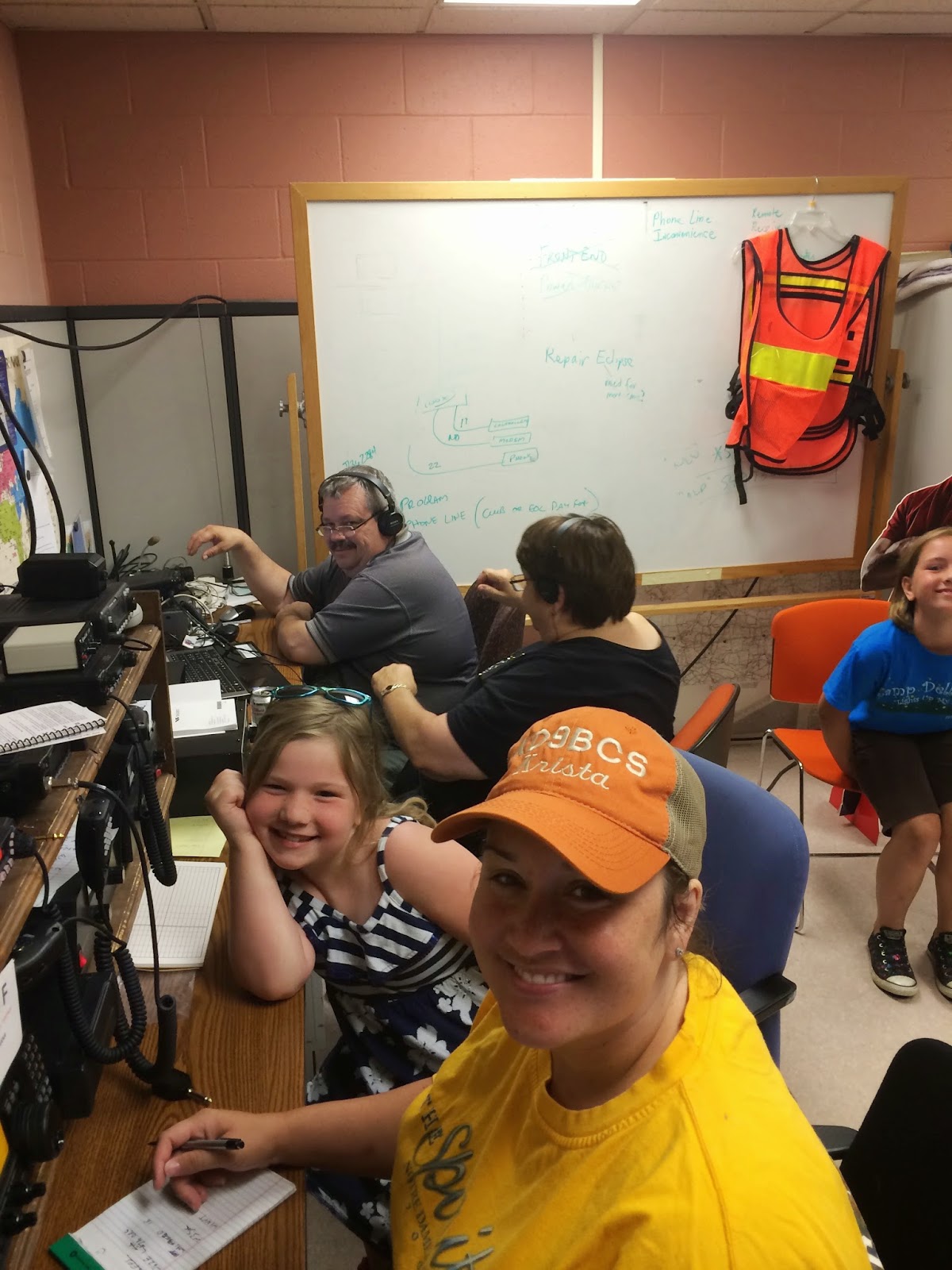 My wife also got a chance to work out on her first ARRL Field Day event, and got a real taste of high stakes contesting!  Since passing her ham exam, she's had several repeater based VHF QSOs, but has really enjoyed listening to HF with me on my QTH radio, a Ten Tec Jupiter.  Upon putting the cans on during field day, she was blown away by the number of concurrent QSOs. ARRL Field Day 2014 will go down in my log as one of my favorite, as the whole family was involved, and got a chance to make several QSOs during the contest period.  Special thanks to the Midstate Amateur Radio Club for having such a fine station available to its members.

Posted by Unknown at 4:40 PM No comments:

I had my very first few DX contacts this weekend on my Ten-Tec Jupiter and Eagle One HF Vertical.  I have to say, that it was AWESOME.  I've had the radio and antenna setup in its current configuration for the past 3 weeks or so, and not really even heard many DX stations.  I've worked quite a bit of the ARRL Centennial QSO party, and been having a lot of fun with that.  But last night around 9:30pm EDT, I started to hear quite a few DX stations on 20m.

It all started with VV2CSI out of INDIA!  I couldn't believe that I could hear someone on the opposite side of the earth from me on my system.  I listened to him have a few QSOs, and then I decided to jump in.  I threw out my call at his next QRZ, and WALA!  He picked me out of the pileup, and gave me a 57 signal report out of India!  Not bad, for my first ever DX station.

After that, I tooled around the band for a bit, and watched the cluster reports from DXspots.com.  If you haven't checked out dxspots.com, you have to.  It's invaluable information on band conditions, and what's being logged where.  Anyways, I worked the band for another 30 minutes.  In that time frame I worked Serbia, Finland, and Russia.  I was also in a pile up for a station in the Azores, but I never seamed to make it through.  All in all, what a great weekend of radio, and my first true DX work.  I couldn't believe it.

All of my DX contacts this weekend were on 75 watts of SSB power on 20 meters.
Posted by Unknown at 6:56 AM No comments:

Getting into HF - My Journey - The Antenna

It's been a few weeks since I have had time to put a post out, for that I apologize.  It's baseball season, and with that small fact, my time to do anything other than coaching, or umpiring vaporizes.

However, even with the baseball, I've still had a chance to move the construction of my QTH - HF station forward.  As a quick review, I started out with a Kenwood TS-520S.  I mighty fine tube driven hybrid radio.  However, in my trip home from Dayton, I found a steal on eBay, and picked up a new to me TenTec Model #538 Jupiter.  Wow, what a radio.  I'll be doing a write up on it, sometime this summer.  So I have the radio.  I picked up a free power supply from my buddy W9ILF, a decent RadioShack 25A switching job.  It so far has been doing the job fairly well.  I have an MFJ Versa Tuner 2 to do the antenna tuning.

So with all that said, the final piece de resistance is an antenna.  This is another area where I had made an early decision to get an Alpha Delta - DX-CC that I would just hang up in the attic, similar to how my dad's station works.  This just never came to fruition.  I ordered the antenna, and I still have it.  In the bag, all nice and shiny, but no place to go.  The attic is a hostile world of high temperatures, and over flowing with insulation.  I just could never bring myself to go up there and give the antenna a proper hanging.

With that on my mind, I began polling the local amateur radio community, and was overwhelmingly pushed to a vertical, given my HOA restrictions.  One vertical that kept coming up in conversation was the "Eagle One HF Vertical Antenna".  This antenna is built by a HAM and his wife over in Ohio.  I checked out their web page, which was pretty simple but focused.  I ordered one.  I figured I'll sell the AD, or maybe use it on field days, or when NVIS may tickle my fancy.  I ordered the complete kit.  It included the antenna, a tripod, and a mounting pole.  It also included 3 rather long copper grounding rods.

In a few hours time, I had racked up several QSOs.  Most of them on 40m, and most of them in the eastern US.  I did hear quite a few DX stations, but I just wasn't making it through the pileups with just the single counterpoise.  Over the next few weeks, I hope to get the number of radials up to around 24 of the 34' length.  When running the radials, I also used some landscaping staples from Lowe's to secure the radial to the ground.  This should keep them from getting caught up in the lawn mower.

If you are looking for an HF Vertical Antenna, I highly recommend the Eagle One.

Like I said, since going to the TenTec factory in Sevierville, TN, I have wanted to own one.  I've spent months combing through ebay every couple of days looking for that deal.  Each time I'd have an Argosy II, or Jupiter at a reasonable price.  And then, it would happen.  I'd lose the auction in the final five seconds.

Well, over hamvention weekend, I guess not too many folks were watching eBay, or maybe just not as many.  I was able to land a great deal on a TenTec 538 Juniper.  It came with the external hand mic, the external speaker, and a radio in near mint condition.  I'll do an unboxing video, and maybe some video tonight and post it back here on the blog.

Finally.  I'm so close to being on the HF airwaves I can taste it.

So here's my setup with the Jupiter.

I'll give a report after this weekend on how it does!